The ol’ man and I had just left Ripley’s Believe It Or Not in Wisconsin Dells and he was getting hungry.

Being that I only survive on antiques and advil, I was not in such a hurry to find him any sustenance.

I popped open Chad Lewis’s book entitled “Paranormal Wisconsin Dells and Baraboo” (that I had just picked up from Ripley’s) and began to thumb through it in the parking lot, eager to find the next stop on my New Years Day adventure.

Because I make everything an adventure. Forget your growling tum.

According to the book, well… 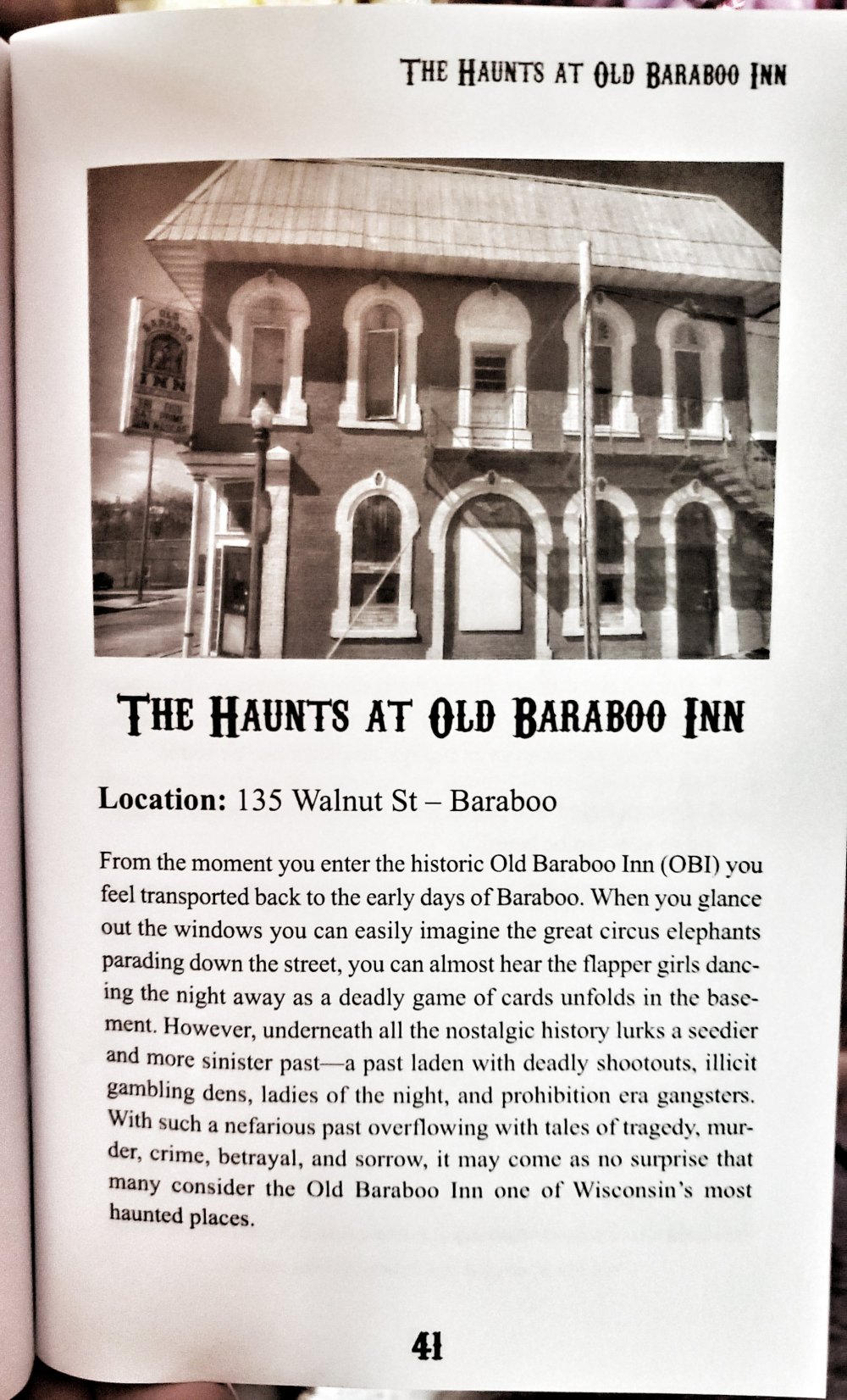 I’ll let you do your own research about it, I just want to share my own personal encounter…

Because unless Mr. B.C. Farr is a master electrician with a trick kill switch behind the bar (and there isn’t,) I absolutely believe had a bonafide paranormal experience at “Wisconsin’s Most Haunted Tavern”.

According to Google “OBI” has a fantastic menu. Depending upon which reviews you read, the food is good too…

We set off to Baraboo and found the beautiful stately building easily enough, located at 135 Walnut Street next to another very interesting building with this embedded into the brick front: 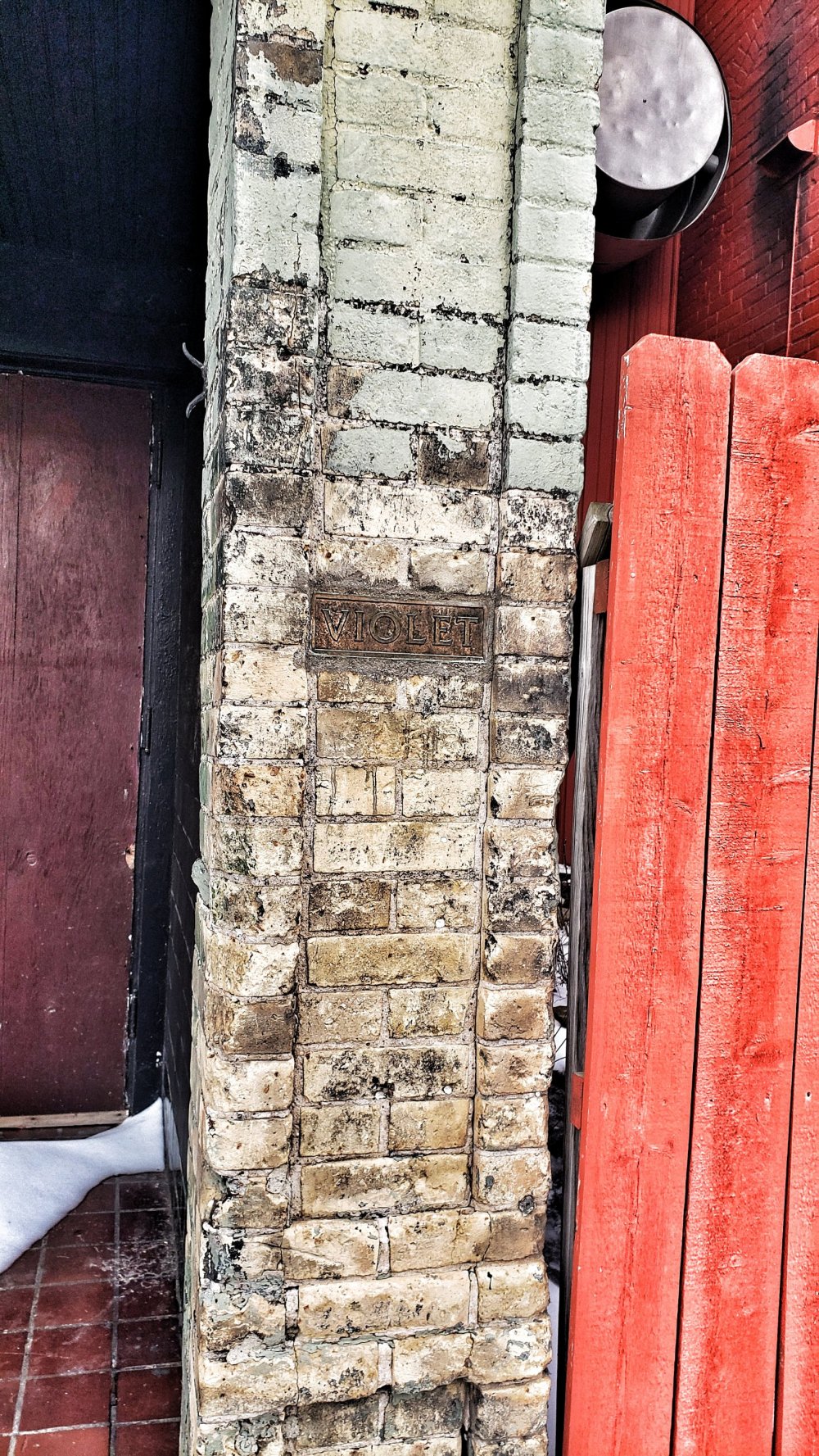 We went inside and all was quiet. I started immediately poking around (because it’s kinda my thing) and after a beat or two we were greeted by an enormous black lab from the back room and a man’s voice excitedly welcoming us in. Before I was able to pinpoint where the voice was coming from, a smartly dressed jovial man in probably his fifties popped out from a door behind the bar and asked how were we doing and what brings us in today?

I told him we were looking for a drink and a menu, and he informed me that “they no longer keep a kitchen but he would be more than happy to make us a drink and do you know where you are right now?”

I laughed and told him that yes, we picked this place out of a book to sight-see, and he proceeded to tell us we were in the most haunted tavern in Wisconsin.

As this conversation transpired, he had begun making our bourbon sours and the jukebox had qued up “Hey Tonight” by CCR randomly.

Like I was watching him [GENEROUSLY] pour our drinks and could see both of his hands for the duration of our exchange.

Just as he took his thumb off the soda gun, the jukebox quit.

We all rubber necked the ol’ Rowe that was still all lit up, but the number display was flashing zeros.

The bartender (who I was just in the process of learning was actually the owner as well!) turned his full body towards it and exclaimed

“Well what the hell?! What did you do that for?

That was a good tune.”

He then turned to me and said

“Ya just gotta talk to them. Welcome to my world.”

And went back to finishing Evan’s drink.

He handed Evan’s over to him, but held mine for an extra second, eyeballing me. Probably because I was still glancing at the jukebox display still flashing zeros. I’ve never seen an older one like that just error out before and found it unusual. Apparently he thought so too.

“That’s never happened before… you a sensitive?”

“…Pardon?!” I jolted out of the sinking feeling I was having at not fully understanding what just happened and I hadn’t realized he was talking to me.

“You a sensitive?” He asked again. “Do you believe in ghosts?”

I hesitated, not wanting to make a mark of myself I responded “Oh… uuuhh, kind of…”

“Well, don’t matter. They believe in you. I haven’t heard not a peep out of ’em all day until just now, they’re responding to you. Either you’re a sensitive, or you brought something in with you. You got some kinda energy.”

With that, he handed me my drink, waved away my money, and whisked us away to the “Gangster Back Bar” to watch the episode of “Hometown Haunting” that just happened to have a feature on Baraboo and the Old Baraboo Inn.

It was a really neat experience, and that place is certainly invaluable for it’s historical significance alone.

But if you ask me, my final summation is this:

They don’t serve food, but they certainly ‘got some kinda energy…

(And B.C. Farr knows how to make a good stiff one!)